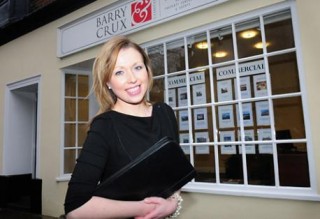 Niamh Thornton of Barry Crux & Company has become the first Associate of the Royal Institution of Chartered Surveyors (RICS) to have qualified via the Real Estate Agency pathway.

RICS introduced the Associate Assessment to recognise the skills of individuals with a minimum of four years relevant work experience, vocational qualifications and technical training within the property profession.

Niamh’s role at the firm originally began as a Secretary in September 2000 which grew and evolved over time to incorporate marketing, advertising and technical training. After returning to work in 2007 following maternity leave, Niamh’s technical role expanded and she began study in Surveying, Property & Maintenance with RICS. In 2010 following maternity leave for her second child she enrolled on the Associate Assessment.

Niamh had to put her studies on hold in 2011 after falling ill and being diagnosed with Lupus (SLE). Returning to her studies in 2012, Niamh was elected an Associate of RICS on 25th October.

Real Estate Agency encompasses a range of functions concerned with the sale, acquisition, leasing and letting of commercial and residential transactions. Niamh undertakes a varied role within the firm, working predominantly in Residential Lettings and Property Management.

Read the article that appeared in the York Press